I am working on 1804 letters written by my 4th-Great-Grandmother to Horton Howard, the man she married in 1806. I believe their romance began when she wrote him a sympathy letter on the death of his second wife. There were several other letters written before the second wife died. I can’t help wonder if this young woman knew that Horton would soon be widowed.

I have transcribed 37 of the letters I photographed in Dayton. This morning I worked on a few short ones. My 3rd-Great-Grandmother’s brother-in-law was an engineer on the Miami-Erie and other canals, hence away from home much of the time. In early 1837 his youngest child died. Then, in late 1838, this was sent to him about his young son: “Yesterday he complained of pain in the bowels, which I supposed might be cholic. Today the pain and tenderness is much increased , attended with fever, general lassitude and increasing, the slightest pressure gives pain, difficulty of breathing – great pain upon coughing.”
I can only think that this sounds like appendicitis. The boy died the day after this letter was sent. It must have been hard to be a parent in those days.

The past two weeks have been full of successful research. Last week I read bits and pieces at the Dayton Metro Library, while photographing 100s of letters. This week I sat and transcribed letters sent home from the war. While working I have gasped in amazement, had “aha” moments when I found missing “pieces of the puzzle,” laughed at amusing incidents and shed a few tears over sad passages. Anyone who’s been following my adventures knows the outcome of Howard G Affleck’s life, as I’ve known for years. Yet I find myself reading these letters, rooting for him to make different decisions, in hopes of a happier ending. Does anyone else do this when they already KNOW the ending to a story?

Yesterday I spent 4 hours at the Buffalo & Erie County Historical Society, transcribing a journal in which my 3rd-Great-Grandmother transcribed the letters written by her son Howard Gladstone Affleck while serving in the Union Army. His last letter was to inform his mother that he’d been injured. A musket ball in his knee led to his death about a month later. As intro, Mary Howard Affleck wrote: “His letters have been preserved, and although, while in camp, or on the march, especially during the time he was in the three months service, he had few facilities for writing, yet so thoughtful and loving was his nature, that a week seldom passed without bringing one, or more, to the anxious ones at home. Many of them were written with a pencil, and have become so dim as to be almost illegible. With the hope of preserving them, and believing that in after years they will be perused with interest by his surviving relatives, they are here transcribed by his sorrowing mother.”
I doubt she had any idea these letters would be read with interest 151 years later. 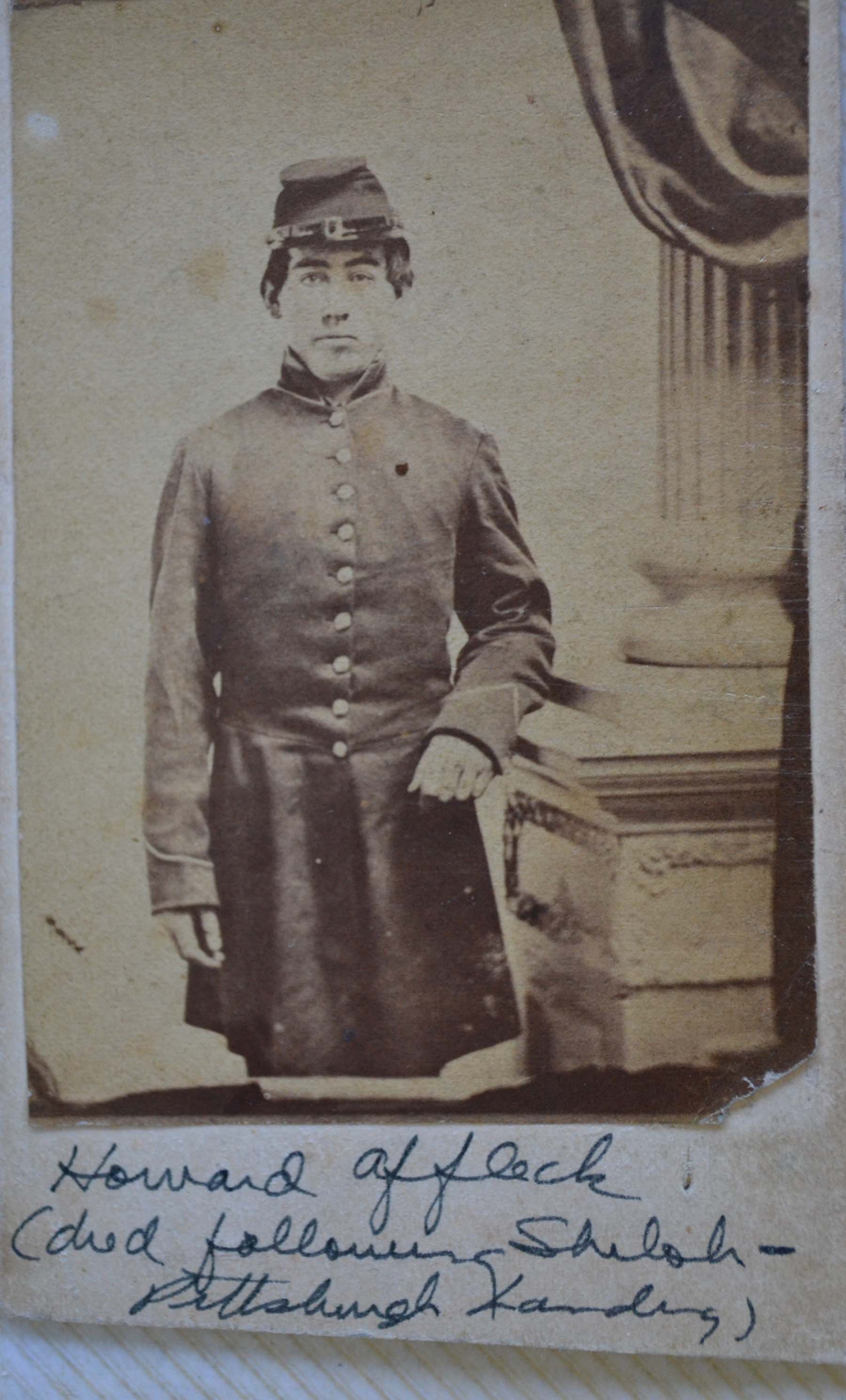 Yesterday I left Dayton, for Uniontown, Oh. I spent the night with my mother’s only remaining cousin. We had a wonderful time sharing memories – mine of his parents, and his of my mother and grandparents. We went through an album of old pictures, and I was delighted to find that he had a picture of Howard G Affleck – the young man who was mortally wounded at the Battle of Shiloh.

I was especially surprised to find a picture of my grandfather’s maternal grandparents. Gottlieb Heil lived in Bridgeport, OH and had a butcher shop in Wheeling WV. His Catholic wife did not approve of the budding romance between their daughter, Mary Katherine, and the young man at the other end of Patterson Run. One Sunday, Mary Katherine set off, ostensibly for church, and met up with John G. Patterson – they eloped, were married and eventually had 4 daughters and 1 son. Every time a child was born, Katherine Heil would march up the street, knock on the door and announce “so I hear you’ve had another bastard.” Other than that, she never spoke to her daughter, or to any of her grandchildren from that marriage.