In 1804, Hannah Hastings of Wilmington, Delaware, visited the Howard’s community and struck up a friendship and correspondence with Horton.  Hannah’s letters were filled with admiration for Horton. I have wondered whether this admiration and friendship naturally blossomed into something warmer, or whether 30 year old Hannah suspected that Horton would soon be widowed again.

In September, 1804, Horton’s second wife, Mary Dew, died of “internal damage,” leaving Horton with his 12 year old son, Henry by his first wife, and with three children that he and Mary shared. Joseph was 6 years old, Rachel was 2, and Horton Jefferson Howard was 6 months.

When Horton’s obligatory one year mourning period ended, Hannah was caring for a  dying mother, and then helping to settle her estate, all while writing to Horton about their plans to marry. With the pressure of changing season and difficulty in travel, Horton convinced Hannah that waiting had disadvantages, and they were married on December 5, 1806. Hannah was 32 and Horton was 36. Over the course of the following 10 years, they added 6 more children to their family. 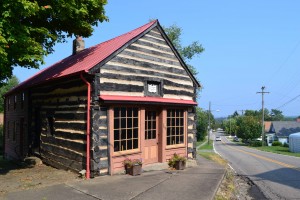 Horton Howard, his father-in-law Joseph Dew, and widowed brother-in-law, Aaron Brown travelled from Carteret and Jones Counties, North Carolina to explore the Northwest Territory just across the Ohio River. Horton wrote home to his wife, Mary, with a progress report from Winchester, VA:

“Dear and Loving Wife … we are all in Tolerable Health at present and have been mostly so since we came from home … and I hope if best these will find you all in health. We are now at Winchester in Virginia having crossed the Blue Ridge of Mountains and are between it and the Allegheny Mountain about Four Hundred and Fifty Miles from Home and One Hundred and thirty six from Redstone. We have been favoured to get along so far with less Difficulty and fatigue than we expected, but we have travailed slower and found after getting in the Hilly Land that our Chair would not answer so we left it at the House of our Friend Clark Moorman at Cedar Creek in Virginia 326 miles from Home, where I purchased for 100 Dollars a pleasant going Mair and now we all go comfortably on Horseback”

I was puzzled by the reference to the chair, until I found pictures from the Carriage Association of America (credit to http://theslowerroad.com/2012/01/14/our-free-afternoon/)